Improve Your Throwing Mechanics While You Rehab From Your Injury! 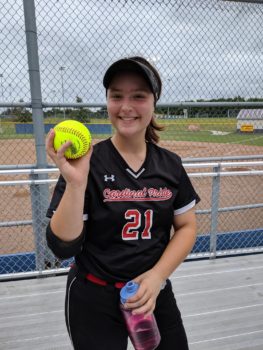 Having to sit out of the game you love because of injury is hard! But behind that frustration and disappointment could be the makings of a great comeback story. Lauren inspired all of us at Omaha Physical Therapy Institute with her hard work and dedication to not only returning to softball after her injury, but coming back with improved throwing mechanics and less risk for future injury!

Lauren had a right Ulnar Collateral Ligament Repair (UCLR) or more commonly known as, “Tommy John surgery”. The Ulnar Collateral Ligament (UCL) is a ligament on the inside part of your elbow. There can be a lot of pressure placed on the UCL with certain throwing types and/or high repetition of throwing. Lauren plays competitive softball and typically threw “side arm” before surgery. After surgery, she worked very hard in physical therapy and when she reached the point of throwing again, we started to address her throwing mechanics. Improving the way Lauren throws increases the biomechanical efficiency of her throwing technique and decrease the mechanical load on her elbow.

In the videos below, Lauren’s “before” throwing technique is on the left and her “after” is on the right. In the video on the left, Lauren goes into the stride and cocking phases of throwing, but upon entering the acceleration phase, she is unable to transfer her power from her legs up through the trunk and into the arm, so she is not in an athletic stance upon releasing the ball and instead, looks like she is falling forward. This leads to less velocity on her throw and allows for torque and energy to be wasted. In the video on the right, Lauren can go through the stride and cocking phases and efficiently move into the acceleration and deceleration phases of throwing in an athletic stance. Throwing power comes from “the ground up.” This means the athlete is able to build kinetic energy from the legs to the trunk to the throwing arm and translate it into rotational power.

As Physical Therapists, we don’t just focus on the rehabilitation after surgery or injury. We understand that no two athletes throw the same, but there are foundational things we are looking for to improve efficiency and decrease unnecessary loads on the arm that could lead to future injury.

If you are a softball or baseball player and have been dealing with nagging injuries or have had surgery, call Omaha Physical Therapy Institute today! We have the specialists that can help you get back in the game safely and confidently!