Cate Christopherson is a senior at Omaha North High Magnet School.  As a former Omaha Physical Therapy Institute (OPTI) patient and current Sporting Omaha FC (SOFC) soccer player, Cate has faced adversity through many injuries that have kept her from playing the sport she loves most. Cate has dealt with ankle and knee injuries that sidelined her for several months at a time. Passionate for soccer, she was determined to fight her way back to the field stronger than ever. With the intensity of youth soccer increasing, numerous athletes are dealing with similar injuries as Cate.  Cate tackles the details of how she overcame the mental, emotional, and physical struggles as an injured athlete. 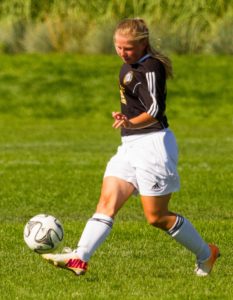 Cate was first seen at OPTI in March 2016 for an ankle injury and most recently for an anterior cruciate ligament (ACL) injury.  As most patients do, Cate first came into OPTI a little discouraged and nervous with some fear of returning back to soccer after her injury.  Katie Cordery, Cate’s physical therapist at OPTI, says this is a common emotion to feel after suffering an injury. “It’s normal to have fear when first coming into rehab.  Every athlete’s goal is to return to their sport.  What’s difficult is finding a way to not only rehabilitate the athlete physically but mentally as well.  We try to provide as much sport-specific skill integration into an athlete’s rehab in order to assist not only with maintaining a certain skill level but also to show them that they WILL return to their sport again, and we, as their physical therapists, believe in them.” Cate progressed with her physical therapy at OPTI with a main goal in mind, to have the confidence to mentally and physically compete like she once had prior to her injury. 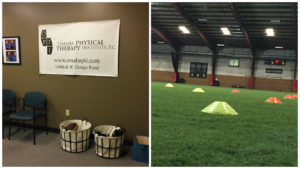 “I was a little nervous coming back into the game because I knew people who had already re-injured their ACLs. I knew there was a possibility for me to tear mine again. Katie reassured me that this should not stop me from returning to play.”  A study published in the British Journal of Sports Medicine in 2011 showed that the national return to play average after an ACL injury was only 44%.  At OPTI, there is a 95% average rate of return to play.  “The treatment at OPTI was oriented toward soccer, a recovery specific to me and my sport. It was extremely helpful in getting me back on the playing field quicker.” OPTI’s Athletes In Motion (A.I.M.) Clinic, located inside of the Omaha Sports Complex, is geared specifically toward helping athletes with the physical and mental transition back into their sports. It allows athletes access to field turf in order to perform their sport-specific rehabilitation.  Cate’s response to OPTI’s A.I.M. Clinic – “It was difficult to come back to the game. My mind was always three steps ahead of my body, so every time I went to cut or get a ball, I would have a late reaction because my body still wasn’t used to playing at a high level again. I am so thankful for the physical therapy at the A.I.M. Clinic. I was able to navigate my mental game as well as get myself back to a high level of competition.” 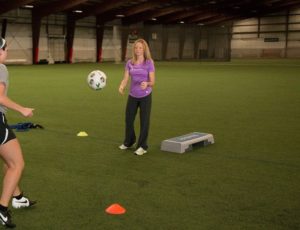 Cate is no longer watching her team from the sidelines.  She is back to playing confidently for SOFC.  She received the Excellence Award for the U17 Girls Gold team, earned captain of her high school varsity soccer team, and scored a record high of 9 goals that same season.  “What motivated me to come back the most was the possibility of being able to play soccer again and the strong encouragement from the team at OPTI.”  Cate also has excelled off of the field. Academically, Cate is 1 of 48 high school seniors across the whole state of Nebraska to earn the U.S. Bank’s Believers and Achievers award for leadership and academic excellence. After Cate graduates high school in May 2017, she plans to continue her soccer career at Central College and major in engineering or pre-medicine. 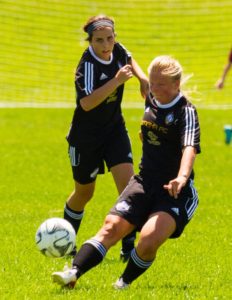 “I would recommend OPTI because it is an engaging environment with PTs who care about their patients and their recovery even after they finish their rehab. This injury was just a bump in my road in playing soccer, but not an injury that would hold me back from playing again.”