Preparing to Play Throughout the Game 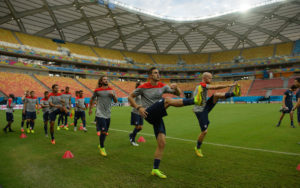 There is always talk about warm-up prior to soccer practices and games but there is rarely a focus on re-warming up at half time or if you are coming off the bench to sub into a game.  It is important to re-warm up prior to entering a soccer game as you need to re-wake up the nervous system and prepare it to protect you while providing optimal output to muscles for coordination, strength, and balance during play.

Here are some simple ideas for re-warm up at halftime once your coach has concluded their first half re-cap and second half plan.

Half time warm up (use half of the field width):

If you did not start the game or you have substituted out of the game but are about to re-enter, here are some easy exercises to do to get you in game-mode after your rest break on the sideline.  If possible, it is suggested that coaches allow a player to re-warm up for at least 5 minutes prior to substituting them into the game.