OPTI Sports Science – How to Improve Your Free-Throw Shooting Percentage! 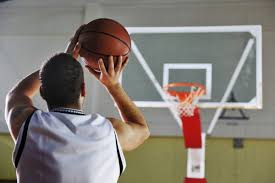 There are two seconds left in the fourth quarter. Your team is down by one and you have just been fouled and are on the free-throw line. Can you be the hero? Or will you choke?  One of the most important aspects in determining a winner in a close basketball game is making your free-throws down the stretch. Being the research nerds that we are at Omaha Physical Therapy Institute, I decided to see what science says is the best way to make a higher percentage of free-throws. The studies below have focused on methods that can improve your free-throw shooting percentage.

Quiet Eye:
The adage ‘keep your eye on the ball’ has been taught by coaches and parents since the beginning of time it seems. While this is sound advice, it has not been until recently that science has validated this concept. As a matter of fact, it actually applies to all sports and activities involving some form of coordination! Baseball players will watch the ball hit the bat. Golfers will focus in on the hole and the ball while attempting a putt. Surgeons need to utilize their visual system to meticulously remove a tumor without damaging surrounding tissue1. The use of the “quiet eye” has also been studied on free-throw shooting. One study shows that basketball players who were taught how to adopt the quiet eye characteristics of elite free-throw shooters (focusing gaze on the rim before shooting a free-throw) performed much better than those players who were taught elite biomechanics (instruction on optimal control of shooting stance, arms, and hands)2. Placing an emphasis on visual focus and attention of the rim even improves players mechanics!2 See this video below for more information.

If you find yourself on the bench with an injury, remember that Omaha Physical Therapy Institute provides specialized care for basketball athletes. Your Comeback Story Starts Here!