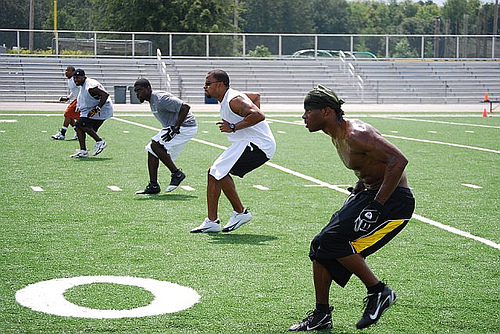 A recent study published in 2018 in the Journal of Strength and Conditioning Research titled “Sprint -Specific Training in Youth:  Backward Running vs Forward Running Training On Speed And Power Measures In Adolescent Male Athletes” by Uthoff, et al,  has shown that speed and power measures can be positively impacted by a biweekly progressive backward running training program over the course of 8 weeks.  The positive training effects of sprint-specific training in boys’ sprinting ability has already been established in the literature for enhancing short-sprint speed up to 20 meters.  Evidence has also shown backward running training to be an integral part of adult training with regards to its improvement in speed and power measures.  However, no research has examined backward running training on forward sprint performance in adolescent athletes.

In this cluster randomized control trial mentioned above from the Journal of Strength and Conditioning Research, adolescent boys were divided into a backward running training (BRT) group, a forward running training (FRT) group, and a control (CON) group who simply participated in their school gym class.  The study examined 20 meter sprint times, countermovement jump height as an assessment of power, and vertical leg stiffness which can contribute to improved running performance.  What was found was that BRT provided greater gains in sprinting performance over 10 and 20 meters compared with FRT.  Both BRT and FRT groups improved their countermovement jump height, and vertical leg stiffness measurements relative to the control group.

Take home point:  These findings are interesting as they indicate that the backward running training modality can be a useful component of a youth strength and conditioning program to improve sprint speed.  Improvements in power, foot speed, change of direction performance, and overall sprint speed can significantly impact an athlete’s performance on the court or field.